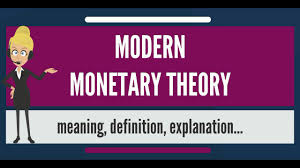 A rising segment of the democratic party is taking a left turn which means, apparently, proposals for huge spending increases without necessarily increased taxes to pay for it. Modern Monetary Theory (MMT) provides justification for what would otherwise look like a reckless buildup of national debt. Critics claim MMT’s proponents use it to justify never-ending government expansion without compensatory revenue streams. In fact, proponents also believe this, allowing liberal politics the freedom to run on sugar without any of the medicine.

I joined the democratic party in order to vote for Barack Obama in the 2008 democratic primaries and because I felt the party acted as a moderate response to the more radicalized Republican party. That party under George W. Bush of the early 2000’s or Newt Gingrich and Rush Limbaugh in the 1990’s has grown more ideological and uncompromising. It was the party of reckless foreign interventions, growing military spending, a callous shredding of the safety net and ever growing debt and deficits.

Barack Obama’s candidacy promised compromise, responsible governing, a more modest, realistic foreign policy, and more fiscal constraint. Unfortunately, Obama inherited a global economy in collapse that required massive stimulus and bailouts and a military enmeshed in two seemingly intractable wars in the middle east. Liberal economists felt his stimulus was too small and the resulting economic recovery was as a result too long and too slow, incurring painful social consequences, placing large segments of our workforce in painfully long bouts of unemployment.

With this background, and in response to a disastrous two year Trump presidency, three years if you include his insane candidacy, a wave of young, liberal and vocal rising stars of the democratic party have swept into Congress eager to set the agenda for both the party and the country writ large.  The rising liberal faction’s first objective is to take control of the democratic party by taking on the more moderate old guard, using kids if necessary.

Ezra Klein recognizing this inter-party disagreement, recently hosted a debate between an MMT proponent, economist Stephanie Kelton and President Obama’s chief economist, Jason Furman, an advocate for the more traditional economic theories that drove Obama’s presidency. Living through the 2008 economic crisis forced me into quite, a bit of deep analysis on the causes and appropriate responses to the economic down-turn. Obama spent eight years governing slightly left of Bill Clinton in the 1990’s, who actually triangulated his way into a moderately conservative presidency. Despite Obama’s moderation, he faced unprecedented obstruction and a mindlessly angry conservative response for daring to take even baby steps away from the 1980’s conservative Reagan consensus.

I think the debate between the more moderately constrained old-guard of the democratic party and the more liberal and energized newcomers is both important and interesting and echos pretty closely the 2016 primary debate between Hillary Clinton and Bernie Sanders.

MMT, according to Kelton, proffers that monetary policy should be more focused on inflation rather than debt. In this view, taxes do not have to match spending as long as inflation stays within acceptable targets. Too much money chasing too few goods and services raises prices causing inflation. Government pulls money out of the economy through tax increases using it to pay down its debt, reducing the supply of money and therefore reducing inflationary pressures. Raising taxes or cutting government spending during low inflation is counter-productive and results in higher unemployment and risks deflation.

When asked if tax increases should accompany the massive spending proposals within the Green New Deal, Kelton’s answer to this is “it depends”. She would ask for six months and a team of economists to evaluate how much inflationary pressure such spending proposals might cause and then introduce just enough taxes to keep inflation in check. Alexandria Ocasio-Cortez believes the Green New Deal investments funds itself and so at this extreme the bill requires no increases in tax revenue to pay for it at all. “For every one dollar invested in infrastructure we get six dollars back.” This statistic may or may not be true and depends largely, I assume, on the effectiveness of the infrastructure spending.

Furman responds in a number of fairly subtle ways. More traditional economic models already does the work MMT attempts to do. The government should respond to deflationary pressures and low unemployment through temporary spikes in deficit spending rather than permanent spending programs. Furthermore, the Federal Reserve keeps inflation in-check by altering interest rates, so tracking inflation is the wrong metric anyway.

Furman believes the US should follow the European model in that all new and especially permanent spending proposals, such as medicare for all or a jobs guarantee should be paid for 100%. It’s not that Furman is a deficit hawk. He believes in Keynesian stimulus especially in times of high unemployment, but he denounces the idea to assume high unemployment in future projections.

In practice, MMT provides an economic framework that tracks what actually happens in government under both political parties. Politically speaking, the voters demand high deficit spending, they want government to do stuff for them, but they don’t want to pay for it. We all want free stuff and politicians respond to these political incentives accordingly. We’ve been in this mode for a long time now, decades in fact, and we haven’t seen high inflation since the 1970’s and that happened for a number of complicated reasons we have yet to replicate since.

In practice the two parties behave like they believe in MMT although they play lip-service otherwise. What differentiates the two parties is in policy. Republicans want a large federal government devoted to security enforcement, walls on the border, a lot of resources policing the streets and a lot of prisons for those we can’t tolerate in our society. They also advocate a large military, policing the globe attempting to promote US interests and to keep terrorists threats far from our borders.

Deficit hawks and a shrinking libertarian wing of the Republican party would like to see a smaller government, lower taxes and a balanced budget, but they are moving more and more to the fringe of the party.

I’m sympathetic to MMT’s promises and I believe they’ve largely been confirmed in practice. I believe lip service to fiscal prudence and a more humble approach to what the federal government can actually accomplish provides a much needed constraint on aggressive government expansion that comes from both parties.

In theory, the government can mobilize the country to effectively respond to global and environmental challenges. In practice, government tends to behave inefficiently and with a significant amount of corruption.

Obama governed softly, using the markets to do much of the heavy lifting, nudging it in one direction or another. This seems appropriately right to me. Will it be enough to correct global warming? Probably not, but you never know. I’m not sure government will ever be up to the task on its own either. And it’s possible this is a problem we really cannot adequately solve.