This week’s Sunday School lesson covers a lot of territory and among the most common, well-known stories in all of western civilization, if not beyond. I heard on a podcast that we are in danger of taking Noah’s flood both too casually and too seriously. I know my kids had this toy as an example of taking this story a little too casually. Because this story is so familiar it’s easy to take it for granted without having absorbed all the lessons it has to teach us. 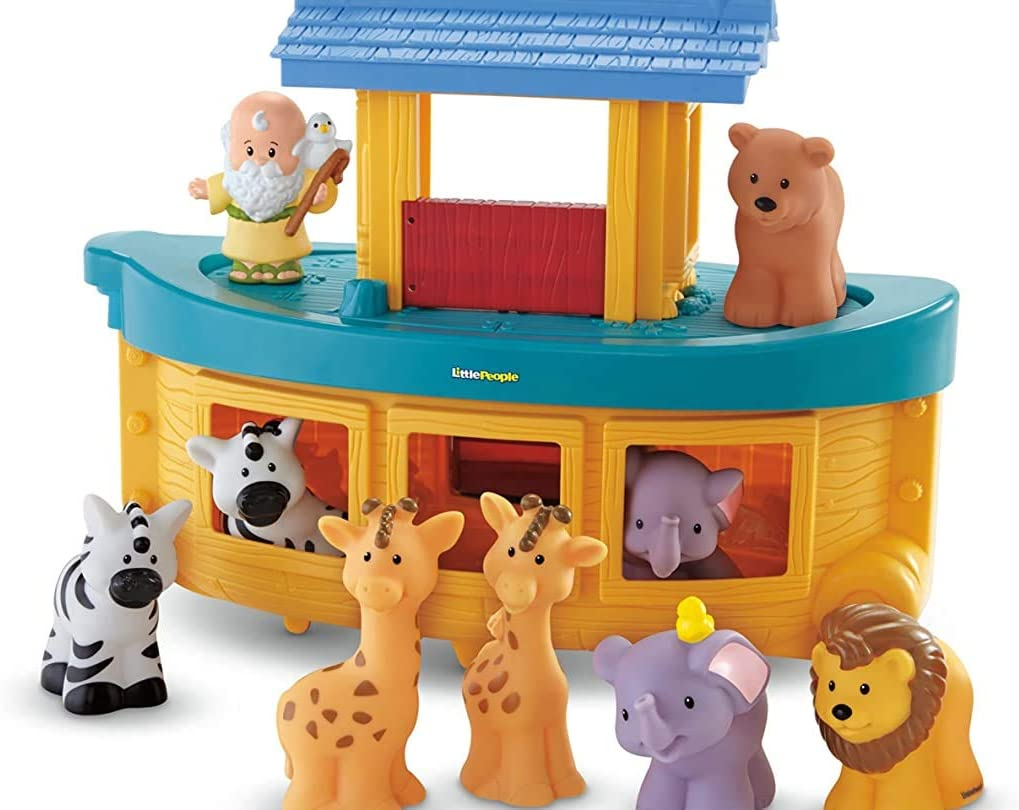 Taking the story too seriously can be perhaps more damaging. Noah’s God comes off as cruel, willing to wipe out human life at a catastrophic scale. Or we can take the wickedness/punishment binaries too literally and wonder why our own efforts at goodness don’t always lead to positive earthly results. Thinking too literally about the global flood as a scientific possibility can lead one down anti-scientific backwaters. The stories in Genesis’ first 11 chapters is an invitation to think through the lens and worldview of those writing the story, the way they perceived the world and God. What, then, can we learn about the mercy and grace of a loving God we all so desperately want to believe in. Noah’s flood is a story we get only through this religious text, although there are very similar flood stories in other myths around the world. This religious text wants to teach its reader about God and that is the way we have to get through and into the story.

This lesson includes the Genesis account of the story as well as Joseph Smith’s revelatory expansion of chapter 6 found in Moses 8.

The people’s wickedness is described consistently as corrupt, a description that is both broad and generic(Genesis 6:11,12, Moses 8:28, 29) but the text does provide three specific examples of that corruption.

A Corruption of Family and Marriage

First, In Genesis 6:2,4 and Moses 8:14,15 it appears on the surface the people were honoring and obeying the one commandment Adam received as he left the Garden of Eden – to multiply and replenish the earth. However, there appears to be corruption underlying this behavior. The sons of God take the daughters of men for apparent superficial reasons rather than as true, loving and equal partners working together within a marriage covenant. Men take possession of women “because they were fair”. In Moses, the Lord accuse the women of selling themselves. This union appears to be more about status than love, an an intermingling between faithful lines ( Sons of God) and those more concerned with their own welfare (the sons of men).

Second, violence is a clear component of their wickedness (Genesis 6:11, 13, Moses 9:28, 30). The flood would be a violent response to violence, but perhaps the flood is emblematic of what usually happens when societies devolve into violence. Violence begets violence. Individual violence scales up into society violence. A society organized into violence struggles to properly protect themselves against the inevitable violence nature inflicts on humanity.

Finally, pride is a clear sin described in the narrative. Genesis 6 describes the people as giants, mighty men, men of renown (Genesis 6:4, Moses 8:18). It appears that that description is probably both accurate but also says something about their emphasis, prioritizing personal accomplishments and renown over faithful lives.

In his book, The Beginning of Wisdom, Leon Kass wonders if this corruption was precipitated by the first non-violent death to take place on the earth when Adam dies. After nearly 1000 years fulfilling the promise given to him after eating the fruit of the tree (Genesis 5:4). These expansive lifespans may have been given them a feeling of invincibility only to have that punctured by the death of the first human, their lone human connection to the garden. How much of our corruption occurs in response to our anxiety of our own mortality?

God sees the wickedness and grieves (Genesis 6:6). In Moses, Noah is the one who grieves (Moses 8:25). Believing in a God who weeps, I believe both accounts are accurate and expresses God’s love and concern for all humanity and offers a lesson for us as well. We should be moved by the catastrophes we see in the world no matter what part of the earth they occur, even if we ourselves are unaffected.

A Massive Reduction in Lifespan

God reduces human lifespan (Genesis 6:3, Moses 8:17) severely impacting how much one person can accomplish, forcing a lifelong reckoning with one’s mortality. Growing lifespan is often used as a metric of progress and a reduction of lifespan usually comes from catastrophe – war, disease, despair. God wants us to have a full and long life, but ultimately, the primary purpose for life is to attach ourselves to God and through God to others. We don’t need one thousand years to do this type of work. What we do need is to emphasize helping the next generation continue our faith traditions. Our lives are short, our primary emphasis needs to be that our faith does not die with us.

A Reboot Through Flood

Ultimately, God decides to reboot. The language of Genesis echos the creation story in some surprising ways. First God looks upon the earth and beholds its corruption (Genesis 6:12). And then allows the waters to come in to destroy the “breadth of life” (Genesis 6:17). In Genesis 7:11, God allows the fountains of the great deep and the windows of heaven to undo what the creation did.

To understand this language it’s helpful to view the world the way the authors of this accounting did, surrounded by water. In the creation, the firmament is created by separating the waters from the waters (Genesis 1:6, 7). The flood reverses the separation, opening the windows of heaven and breaking up the earth. 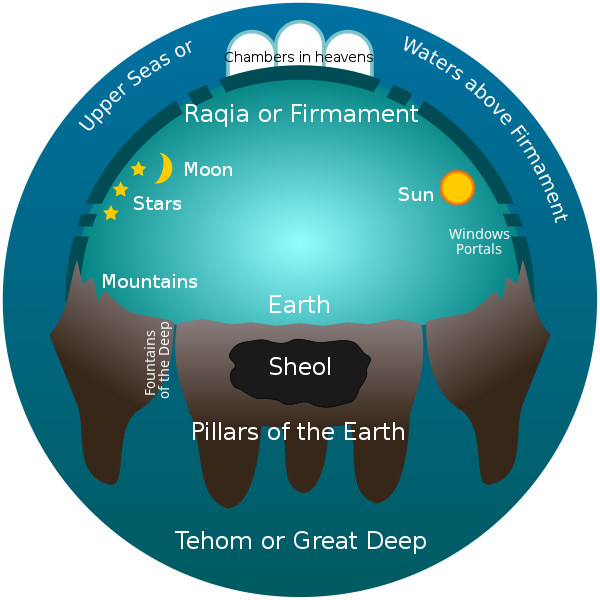 A view of the world in this way, it’s easy to see the human vulnerability, sitting on unstable soil floating on deep waters, shielded from waters overhead by a leaky roof. Water in this world was symbolic of chaos and water, though necessary for life could also destroy it.

Starting over did not require a new creation. Instead, God preserves Noah, his family and a selection of the animal kingdom. Noah is tasked to preserve and continue life through this massive cataclysm, chosen not for his skill but for his faithfulness (Genesis 6:8,9,22, Moses 8:13, 27).

God commands him to build the arc, gives him precise instructions and Noah unquestionably obeys (Noah 6:22). In Moses 8, Noah tries to warn the people, pleads for them to repent, pointing them to Christ, through covenants and ordinances (Moses 8:16, 29, 24).

Through this story and the next, covenant runs through the narrative and becomes one of the key lessons for those of us wondering how we can find peace and safety (though not necessarily freedom from suffering or death) in a troubled, difficult and often tragic world. In Genesis 6:18, God makes a covenant with Noah that he will be protected through the flood. In the midst of the flood, God remembers Noah (Genesis 8:1). The first thing Noah does after leaving the ark, seemingly unbidden, is to offer sacrifice. In response, God recognizes the inherent flaws in humanity and then makes the most famous covenant noted by the rainbow, to never again flood the earth (Genesis 9:11-15). Finally, Genesis 11 ends with the introduction of Abraham, connecting Israel to Noah through both lineage and God’s grace.

Noah, though righteous is flawed, understandably so. The sadness and anxiety of being among the very few who survive the flood. In response to that trauma, creating wine from a vineyard seems to have been an urgent priority. Noah gets drunk and passes out naked in his tent. Ham sees it and tells his brothers. His brothers cover his nakedness being care to do so without looking.

Like the rest of early Genesis, the story is spare. But in Ham there seems to be an impulse to denigrate his father. In Shem and Japeth there seems signs of respect for his authority. In the end, Noah curses Ham’s son, not Ham and recognizes the God of Shem. Our sins, weaknesses, failings and struggle tend to transmit through to our children. Geneology and the blessings, culture and faith that transmits through geneological lines is an important part of the Biblical narrative. Failure to respect, cherish and absorb the best of what our parents have to offer us will hurt not just us but those children we bring into this world. 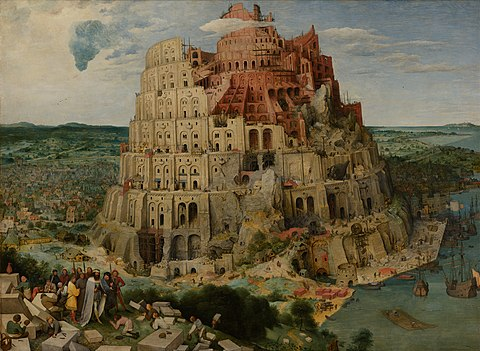 The lesson concludes with another spare story, the impulse to build a tower in Babel. Here is among the first attempts at civilization. Likely in response to the flood catastrophe and a recognition of their own vulnerability, Babel is a fully human attempt to take control and provide protection and sustenance. Using brick for stone, slime for mortar (Genesis 11:3), they try to reach heaven and make a name for themselves that will endure (Genesis 11:4). God has to come down to see this and decides to disrupt their attempts by confounding their language (Genesis 11:7) and as a result of their confounded language, they abandon their attempts and scatter (Genesis 11:9).

How do we try and fail to control our environment, predict the weather, hold back the floods, lean into technology without grappling with our ethical responsibilities beyond just what we can do and what we discover. Is scientific and technological innovation all we need? Can a fully humanist response to the human condition be enough? This story provides an emphatic no in response to these questions.

What’s clear in these narratives our primary focus should be toward God through covenant, manifested through reproduction and ensuring the transmission of faith flows through the geneology that comes out of that reproduction.

Making our mark more often than not ends up in catastrophe. Or perhaps catastrophe is baked in the his world. The writers of Genesis believed in a world surrounded vulnerably by waters from both above and beneath. Water can be catastrophic and chaos inducing. Even today, we struggle to deal with the chaos of water as hurricanes spring up on a regular basis, flash floods erupt out of an unusually excessive storm. We’ve made progress in predicting the weather, holding back the water, but regularly nature overwhelms are best efforts.

However, our more modern view of the world should give us plenty of reasons to be petrified, a crust floating on a ball of fire making up a globe rotating around the sun with massive rocks regularly hurling past us, with plenty of marks indicating past, life altering collisions. Floods, fires, earthquakes, disease and all sorts of catastrophes spring forth out of nature regularly wreaking havoc. Meanwhile, humanity’s propensity to destroy ourselves has been pandemic in earth’s history with regular eruptions of violence happening individually and among nations.

Ultimately, in the midst of our vulnerabilities, weaknesses and confrontation with our mortality, the way to peace is God.