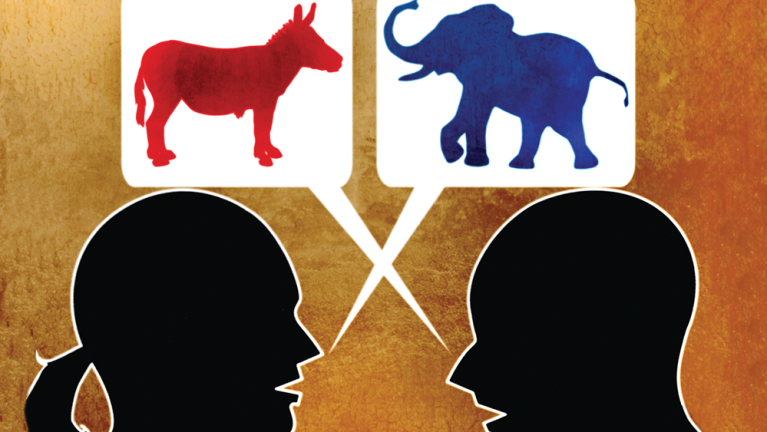 VOX has a nice summary of a recent discussion between Trevor Noah of The Daily Show and a conservative lightening-rod Tomi Lahren of the Blaze. Watching the debate, I found Tomi Lahren articulate and passionate even as she found herself falling into self-contradiction, and logical dead-ends. The obvious example is when she tried to conflate the rioters with the entire black-lives matter movement but refused to accept that this is equivalent with conflating the KKK support of Donald Trump with Trump himself.  Or when, in the context of Colin Kaepernick’s choice to kneel during the national anthem, refusing to explain how should a black person get their message out there.

I’m nowhere near as articulate as Tomi Lahren but I have tied myself into my own logical knots trying to defend deeply, emotionally held positions using rational logic alone. The reason why liberals lose democratic elections even when it seems they have the better argument and when they have, what seems like the expert consensus from academics, scientists, economists and the “mainstream media” is because they are coming at these debates from a decidedly secular point of view without having a deeper emotional, religious narrative to really drive it home and to inspire passion. The movement has been largely data driven, evidence based, reasoned and logical approach to government. The expectation is that the American people will be reasoned their way into the correct position.

Liberalism has become the movement of reason and rational thought. 2008 Barack Obama is an interesting exception. His presidential race had a decidedly religious, even evangelical feel to it. His campaign slogans included “know hope” and “yes we can”, even as it was mocked by his critics for being too messianic in tone. This video is a really great example of this:

But when the realities of his presidency hit, many of his followers felt let down. He transitioned from messiah to conventional democratic politician fitting into the same government grooves carved out by his predecessors.

Conservatism has always been a little more illiberal and a lot more rooted in old ideas and a lot more dependent on churches for its authority, guidance and power. The conservative elites are largely religious.

And conservative rhetoric, as a result, is more emotional, more earnest, at times thicker and more difficult to explain. It’s why the gay marriage debate was so difficult for conservatives. Liberals found a broadly appealing and sympathetic narrative, made their case over and over again, logically, rationally in ways that were difficult if not impossible to refute. The conservative counter relied more and more on religious appeal. When the gay movement started to make a religious case for marriage, it just became a matter of time they would win. Ross Douthat made a late valiant effort and in that debate, hit on something that describes much of what goes on in conservative circles still.

The particularities of heterosexuality are very particular, and only a thick understanding of wedlock, I suspect, can hope to do the kind of important cultural work that Tushnet is describing, and push heterosexuals not only to think about their behavior within marriage, but also how their entire sexual lives fit into the marital ideal. (This thickness issue also helps explain what often sounds like tongue-tiedness and/or desperation from social conservatives when they’re asked to explain what, exactly, it is about marriage that makes it distinctively heterosexual: the whole “well, it’s about love and monogamy and complementarity and fertility and sex differences and childrearing and …” refrain, which seems unconvincing to many people, should be understood in part as an attempt to grapple with just this complexity.)

I suspect, though, it was never really about a complexity too difficult to explain so just trust us. It was more that opposition to gay marriage has always been fundamentally rooted in religious tradition. Liberals were making mostly secular, rational arguments while conservatives have traditionally relied on a more religious reasoning that fundamentally “defies all understanding.”

Getting back to Tomi Lahren’s apparent anger that Colin Kaepernick would dare defy the flag, I wish that instead Trevor Noah would have invited David Brooks who could have explained it this way.

Sitting out the anthem takes place in the context of looming post-nationalism. When we sing the national anthem, we’re not commenting on the state of America. We’re fortifying our foundational creed. We’re expressing gratitude for our ancestors and what they left us. We’re expressing commitment to the nation’s ideals, which we have not yet fulfilled.

If we don’t transmit that creed through shared displays of reverence we will have lost the idea system that has always motivated reform. We will lose the sense that we’re all in this together. We’ll lose the sense of shared loyalty to ideas bigger and more transcendent than our own short lives.

If these common rituals are insulted, other people won’t be motivated to right your injustices because they’ll be less likely to feel that you are part of their story. People will become strangers to one another and will interact in cold instrumentalist terms.

Both David Brooks and Ross Douthat are gifted conservative writers and thinkers who also happen to be employed by the fairly liberal, definitely “mainstream” NY Times. They constantly confront and wrestles with liberalism while maintaining their conservative (though in both cases, moderate) sensibilities.  And they have a rather rare ability to wrestle out of what is inherently emotionally and religiously held view, the underlying deeper logic. In other words, they understand conservatism but they speak liberal – and as a result, they have been transformed by the process and are now largely (and unfortunately) mistrusted by the movement they claim to represent. And it’s no accident that both have been among the most passionate critics of the Trump presidency.

The problem here is that not only are both sides talking past each other, they aren’t even speaking the same language. But it’s more than that. They have completely lost trust in each other. It’s not just that both sides disagree, it’s that they both claim moral superiority. When Trevor Noah asked Tomi Lahren what she wants people to understand, she responds by saying that she’s just saying stuff that needs to be said and by saying this stuff, by believing this stuff, she wants people to believe it doesn’t make her a bad person. Fundamentally, she and her listeners want a voice, they want a platform and they want respect.  And liberals want the same thing. In fact it’s what we all want. We want to be heard. This is human and natural.

A Possible Solution – A Conversation

Is it possible to talk our way through this?  I think it’s possible, but most people don’t have the time, willingness or inclination. Which is fine, but if we’re not willing to engage, then we should at least hold onto our position with a lot more humility. Before you point your finger my way, know that I agree. Humility is a goal for us all. In fact, this is a prerequisite for thoughtful conversation – where you always leave yourself open and vulnerable to a conversion to the truths presented by the person you are talking to. And if we choose to skip the conversation, it’s even more vital to recognize our fallibility. The less often our views are challenged, the more likely they are to be wrong (or at least shallow).

The way forward is to recognize we’re each trying to solve the same problems using different set of tools and approaching it from different perspectives. Religious arguments tend to be more emotional, spiritual and rely more on tradition, spiritual authority and scripture. Their power is driven more from the heart than the head. Rational, secular arguments rely more on reason, logic and data.

Both points of view have value, both are important but both have significant flaws. An over-reliance on reason can feel like hubris in our own ability to understand a universe that really is beyond all comprehension. An over-reliance on emotion, feeling and religious sentiment can leave us stuck in old prejudices and traditional thinking based on bad information.

We need both points of view in the discussion. A religious appeal, at its best, connects with the inherit goodness and generosity within each of us, aspires us toward something beyond ourselves, and helps us to connect with each other. A healthy loyalty to our religious tradition roots us to the wisdom of our past and keeps us from pushing too far, too soon. Rational argument keeps us tethered firmly to the realities of this world and grounds us in our capacity to learn and discover and helps to evolve into new truths.

We need each other.